It is finally here! The collection of the first 6 Piracy is Liberation books! Bigger format, better paper, new material, and it’s heavy as Hell with its 436 pages! 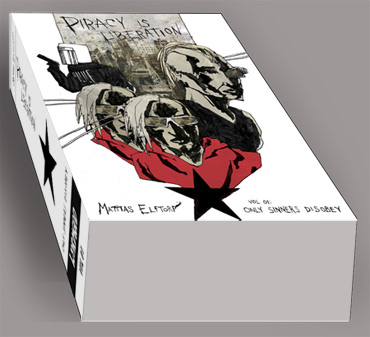 The story of a future city where Capitalism has become religion. A future city where the people are being kept ignorant and obedient through mandatory television, not knowing that things have ever been different or that anything exists outside the city.
A city where downloading random information is used as a drug. An illegal drug, and if you go against the commandments you are a sinner and nobody loves a sinner.
A city where the Priests, Masters and Police run everything, using deadly force to ensure order and profits.
A city not unlike our own world.
A city where only sinners disobey.

A city that is ready to burst.