Entertainment culture is escape culture but do we break free?

I guess the answer is: “yes, temporarily”(?). It’s nice to have somewhere interesting to hide while the monsters of Fascism and Capitalism eat the world around us, and it’s a great privilege to have this escape hatch.

I learned in school that privileges are meant to be used. Whenever us kids didn’t like the school food, the grown-ups told us to “think of the children in Africa”. Because as we know, all the children in Africa are starving (this was the 1980s, but I guess this image more or less prevails). I did think about them, but I could never figure out how they would be helped by me forcing myself to eat food I didn’t like. It should be the other way around. I’d gladly share my food, which I figured would help more. Maybe they meant that our food would taste better if we were thinking about someone else suffering while we ate? That doesn’t seem right either.

What I think now is that they meant that growing up in a rich country made us privileged, and it was somehow our duty to enjoy those privileges (even if we didn’t find them that enjoyable). I’m still not sure what to take away from that experience, but there’s probably a lesson about subconscious(?) racism in there somewhere.

Some of them (a few) were even without pictures… 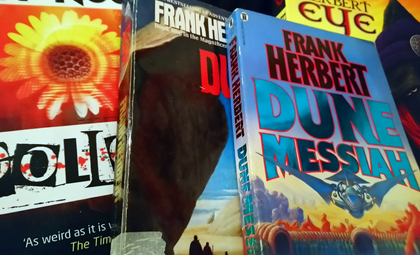 Considering how long it takes me to read a book, maybe I shouldn’t re-read old stuff, but I figured it was time to see if Frank Herbert‘s Dune series was still as good as I thought half a life ago. Maybe treat it lika ritual ayahuasca trip that you should do once in your youth, once as an adult and once when you’re old? Anyway, I got through Dune and Dune Messiah, which was a good start. And they are still that good. I’m planning to also read some other stories by Herbert in the near future, so I started on Eye, a collection of some of his short stories.

I got hold of Jeff Noon‘s Pollen, the sequel to Vurt, but it wasn’t as good as the first part and now I’m not looking forward as much to when I find Automated Alice, even if I do like the concept of these books as sci-fi sequels to Alice in Wonderland and if I find it I’ll probably read it.

Also decided to give Stephenie Meyer a chance with The Host. It did have some nice concepts, but also some elements I wasn’t as fond of, or rather there was some untapped potential that I would have liked to see further explored. In any case, I’m glad Kinga got me to read it.

That’s it for the lesser kind (text only) of books. Here’s some comics: 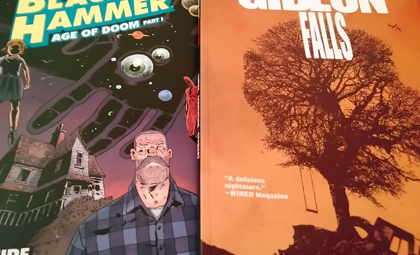 I borrowed and tried out some of Jeff Lemire‘s books (Sweet Tooth, Underwater Welder, Royal City, etc), but the ones I like most are the ones with, in my opinion, the best art, like Black Hammer (Dean Ormston) and Gideon Falls (Andrea Sorrentino). Both of which actually turned out to tackle the same subject in a way, but from different angles. 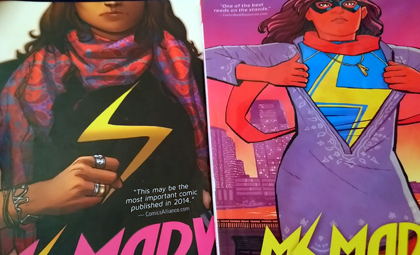 Also borrowed and read some of the new Ms Marvel by G Willow Wilson and Adrian Alphona, etc. Kind of feel-good fun superhero story. I can understand why it got all that attention when it came. 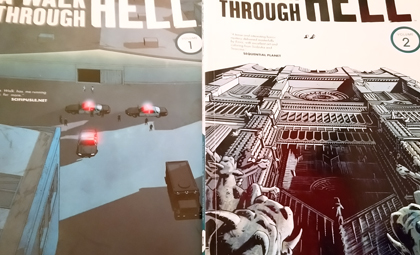 A Walk through Hell is one of the few horror comic that work quite well. Psychological, religion-inspired horror set in a socio-political context, by Garth Ennis. He treats identity politics quite interestingly here, kind of making fun of it while simultaneously validating it in the story. 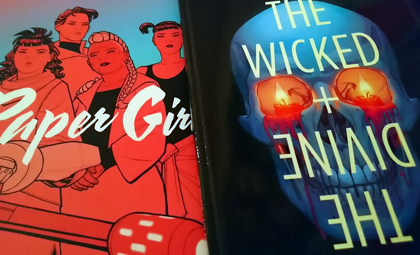 I read the Secret Avengers run by Brubaker/Ellis/Remender. When it comes to Marvel, I was never as much into Avengers as I was into X-men. But I follow where the good writers take me, so now I ended up here. And with the exception of X-men Red, what recent X-comics I’ve read were really not that great. They finished the storyline with the young time-displaced X-men a few years late, because that story never made sense, and what they did with the Uncanny X-men: Wolverine & Cyclops (Matthew Rosenberg) was just stupid. Killing important and not-so-important characters off-panel just because they could, then pretending that it had any kind of emotional impact didn’t work for me at all. There were also all these references to previous events, but the characters seemed to be written as if there had been no character development at all since the early 80s. I’m well aware that I’m picky when it comes to this stuff.
On the other hand, I felt that X-men Red, written by Tom Taylor, tried to do something new. Updated conflict-resolution that was less about Heroes punching the Bad Guys and more about finding new ways to break that pattern and build a better world. Too bad they didn’t let that one go on for longer.

Sometimes I wonder if I’m too old for this shit, but I am part of a generation that never really grew up, after all. And I can also blame it on my line of work. Anyway, I’m looking forward to Jonathan Hickman‘s run on the X-titles, which I haven’t started reading yet. 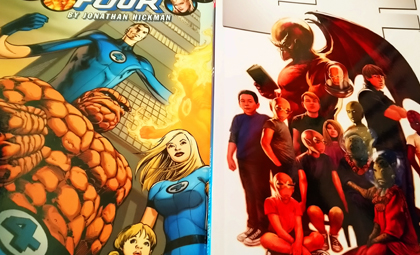 Instead, I read Hickman’s run on Fantastic Four/FF and I’m thinking of returning to his Avengers/New Avengers/Secret Wars before I get to the Dawn of X stuff. See if there is a thread to follow through all of it, since he’s working himself through all the major Marvel group titles. Fantastic Four is another titles that I’ve hardly read. After John Byrne‘s run, I’ve basically only read the one by Millar/Hitch and a miniseries by Grant Morrison. Which was all good, I’m just not that interested in the characters themselves as much as I am in well-written stories. 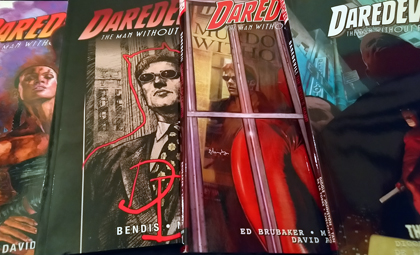 Speaking of going back to well-written stories… I hadn’t realised how good some of the things were that I missed in the 00s/early 10s. I knew there was some potential in the Marvel Knights line, for example, but I had missed the whole Daredevil storyline by (mainly) Bendis/Brubaker/Diggle. It’s actually one long story that took them something like 10 years to get through to the end. Admittedly, the Bendis/Brubaker parts of it were better than the finish, but those were really good. Also of course the David Mack installments, but that was never a surprise. 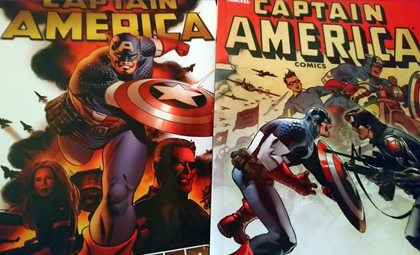 Speaking of Brubaker and Marvel comics of that era, I’ve also started reading his Captain America, and am not disappointed. It’s kind of weird how it took me so long to discover Brubaker, but on the other hand I could never afford getting everything I wanted, so I had to ignore some stuff I would potentially have liked. It worries me a little that some of the titles I’d like to catch up on now are starting to be hard to find.

One of those hard-to-find comics seems to be Alan Moore‘s Providence, which disturbs me like an unnamable thing lurking in the doorway. Hopefully I’ll find them some day.
What I did recently read by Moore, however, is Whatever happened to the Man of Tomorrow?, his “final” Superman story from around the time of Crisis on Infinite Earths (mid-80s). This was also the first Superman story I ever read as a kid (first superhero story, even). It truly scared me as an 8(?)-year-old, though it didn’t scare me off from the whole genre, and I had these vivid recollections of it when I read it now. I even destroyed my copy back then, so this was the first time I re-read it since maybe 1987…

Did you know that DC started an imprint in the 1990s called Milestone, with Black superheroes, by Black creators (or at least non-White)? It’s another one of those things I was aware of and curious about, but couldn’t afford to explore back then. I recently found one of the miniseries from that era, Wise Son: the White Wolf, by Ho Che Anderson. It was obvious that I missed some context since it was about a character connected to the other Milestone titles that I hadn’t read, but you can’t really go wrong with HCA, and it still felt like he brought some of his own stuff to the story.

On the subject of CBA-connected creators… One of the artists of the upcoming CBA vol 47 is Francisco Sousa Lobo, whose The Care of Birds (published by Chili Com Carne) I got at CRACK! this summer. It’s about a bird-watcher who “is to paedophiles what bird-watchers are to hunters”. A slow-paced story that I’m not entirely sure how to describe, but that I enjoyed in all its mundanity.

Also at CRACK!, I got André Coelho‘s Acedia (also from CCC). We never published Coelho in CBA, but he did a piece of fan art for one of my Piracy is Liberation books, and we’ve collaborated on some projects without ever meeting (unless I’m forgetting something). Anyway, I’ve always liked his art, and this was no exception, in a darkly hallucinatory story of sex and mental states.

Speaking of CRACK! and Novo Doba and European underground comics… Penis Tutorial is a book made in silk screen in several colors by Bernharda Xilko, printed at Matrijaršija in Belgrade.
I got it at Novo Doba and it was probably what pushed us over the edge to make us actually do a book in silk screen (mine and Kinga’s Sleep Paralysis, which we admittedly haven’t printed yet, but we plan to, I promise!). Beautiful book, lots of over-sized dicks. Very colorful.

At some point I think I need to find a way to edit/publish an anthology of antifascist comics. But I want it to be fictional stories with antifa sensibilities rather than yet another “this is what Fascism is about”. So I went and got The Antifa Comic Book: 100 Years of Fascism and Antifa Movements by Gord Hill, which is a very informative book about what Fascism, and Anti-Fascism, is about. So exactly the thing I didn’t want for my planned anthology, but apart from that it was good. Really focusing on the antifascist movements in a way that you don’t see much of in the mainstream, where the only acceptable antifascism basically ended with Hitler in 1945 and everything since then has been too violent or deemed unnecessary. This book shows pretty clearly that it’s far from unnecessary, and it shows what happens when antifa movements (of any kind) fail.

By the way: Did you ever think about how lucky we are that Hitler invaded Poland and that the second world war happened? Because it wasn’t the Holocaust or persecution of Jews and others that made the Allies fight against Nazi Germany. The only problem they had with Hitler was his territorial aspirations, so if it wasn’t for that, the racism and the Holocaust wouldn’t have been seen as such a big problem. After all, that stuff was in part inspired by the segregation politics in the US, which we of course know is the Greatest Democracy ever. I think that’s an important thing to remember when trying to understand our current Liberal/Capitalist democracies and how they deal with (or don’t deal with) today’s Fascist (and related) movements.

See now what happened. Here I am, trying to speak about comics and it ends up on the subject of Fascists again. Fucking Hell, they’re everywhere these days.

I know this is part 3/3, but there still are 2 more to come. Watching tomorrow and Playing after that. So stay tuned if you’re interested in what I have to say about some films/TV/games…