Only a week left now until it all starts, so I thought it was time to post a bunch of related stuff.

First, you should check out the program. There will be exhibitions, a workshop at Fanzineverkstaden, a comics fair, several really interesting talks, from a panel about the dictatorship in Chile, to thoughts about the future of Sweden, to an analysis of the social/cultural climate in Iraq under Saddam to presentations of various comics projects and a Balkans panel that could lead anywhere…

Here’s my introduction to the theme:

HOW TO SURVIVE A DICTATORSHIP

Sweden is normally seen as a true democracy, but we’ve only had universal suffrage for about 100 years and the right to vote can’t be taken for granted in the long run. Even now, there are sections of society not covered by democracy, and there are parts of our lives that we have no direct influence over when we vote every four years. For example, corporations are not democratically structured, even though work takes up so much of our lifetimes. If you are undocumented or homeless, it’s easy to see how you’re not really included in the democratic process. Furthermore, the decisions are made by people who can earn more in a month than many of us get in a whole year.

Sometimes, people are even coming here from other countries to escape dictatorships, but we close the door in their faces as if they were contagious. Loud voices are talking about the dangers of foreigners, especially refugees. As if being born outside Sweden automatically turned you into a scary psycho rapist or terrorist.

This is of course bullshit, perpetuated by the kind of politicians whose goals are to make our democracy even less inclusive and less democratic. It’s important to judge both people and politicians by their actions rather than their rhetoric and nice words. When they claim to love their nation, it’s usually code for something much darker.

Several of the guests at AltCom were born outside Sweden, yet they are hardly scary at all. Rather, they may have valuable experiences to share.

What would happen if, after the election, these loud voices would have enough power to actually abolish democracy for all or parts of the population? How would we handle such a situation? What are our strategies for surviving a dictatorship?

AltCom is not only a comics festival but also a forum for discussing these and similar issues.

And because we don’t know when to stop, we took the opportunity to also organise a new edition of the Wormgod noise festival TRAUMA, this time in collaboration with Noise Against Fascism. At Plan B: 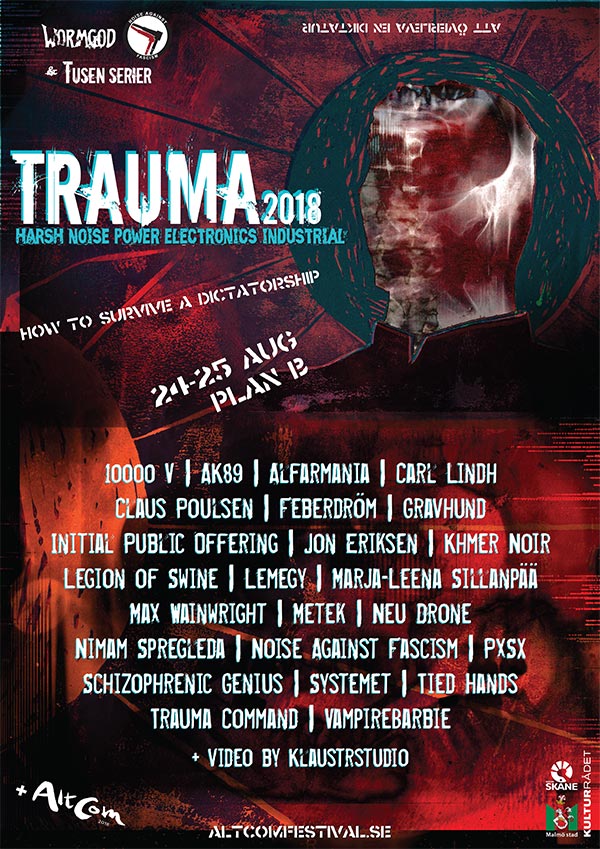