Thought I’d try to recollect what I’ve done this past year. Starting with December 2009, since that’s where we are now and also since that’s really when the year started for me…

During two weeks last December I made the story Spyware, which will be part of the upcoming Piracy is Liberation book 009: Deicide and which went on to the final round (top 8!) of the Japanese Morning International Comics Competition. 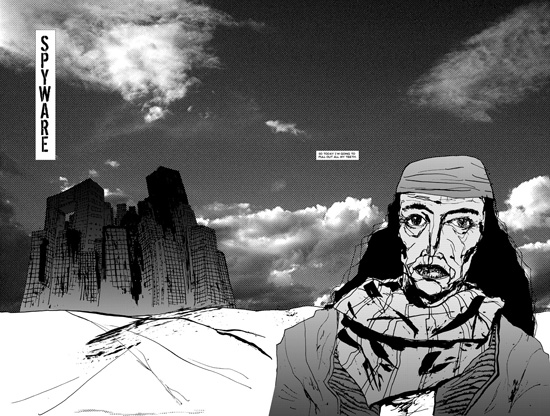 December was also the start of the Dystopia project, which is a title I’m doing for Wormgod & The Swedish Comics Association. Different artists doing sequential short stories on their visions of the dark future that may or may not be on its way. These are the books that have come out during the year:

01
Side A: Vanja & Vanja by Danijel Zezelj
Side B: Desert by Carol Swain
(also available in Swedish) 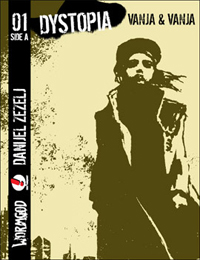 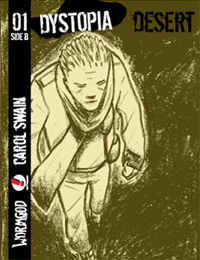 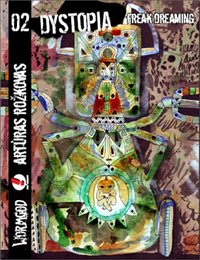 03
Side A: TK 47 by Spyros Verykios
Side B: Nail Story / Ramon by Igor Hofbauer
(also available in Swedish) 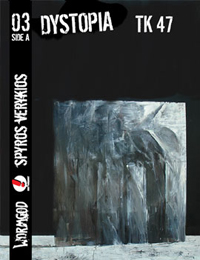 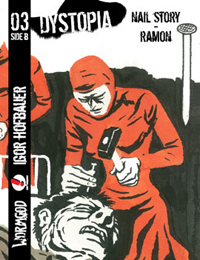 04
Reclaimed by me…
(also available in Swedish) 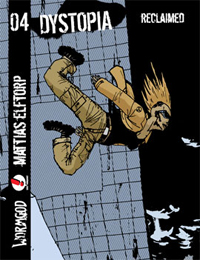 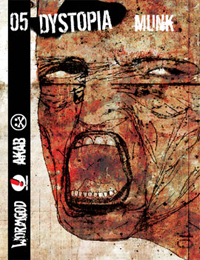 06
Side A: War Peace by Rocco Lombardi
Side B: Blatte Royale by Amanda Casanellas 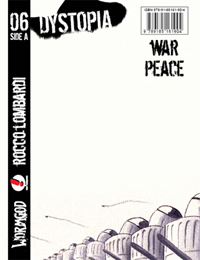 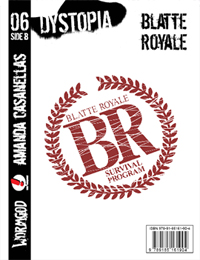 07
by Sarah Kläpp
Side A: White Light Bright Heat
Side B: The Shut Room 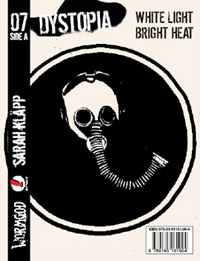 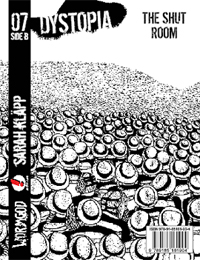 08
The Moon Boy by Jyrki Heikkinen 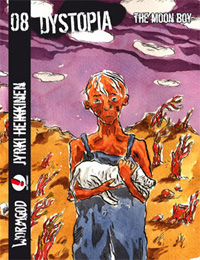 09
Side A: Ulac Smah Ulac by Rocco Lombardi
Side B: Me & my Daddy & Zlatan by me 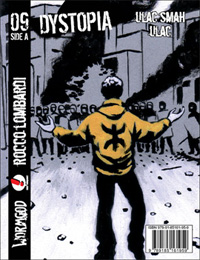 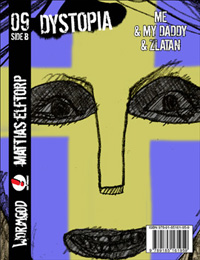 10
Zombies by Wormgod (me and Susanne Johansson) 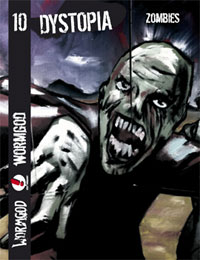 I also made one book in the Piracy is Liberation series this year. Book 008: Spiders pt 2 (cover by Susanne Johansson): 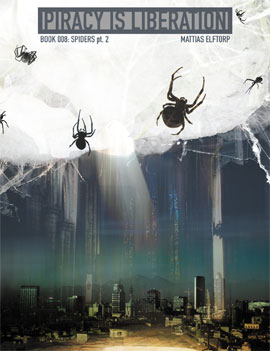 And I started serialising Piracy is Liberation as a webcomic, starting in May from page 1 och book 001, publishing one new page every day, but somewhere in the end of the summer I kind of stopped updating it. It will come back on track, I promise! Hopefully soon. Chack out

Ok, let’s see. I wasn’t at Angoulême or MoCCA this year (nor Bok- och Biblioteksmässan or the Anarchist Book Fairs in Stockholm or London), but I did go to the Kemi festival in northern Finland, where I recieved third prize in their comics competition (for Jag & min Pappa & Zlatan). Then, there was the SPX in Stockholm, Komiks.dk in Copenhagen, my favorite festival, CRACK! in Rome and the always nice Helsinki comics festival. And, of course AltCom 2010 in Malmö, but more on that later.

Second year of Wormgod started off with a DJ session by Suss at Skånes Konstförening in conjunction with a noise gig starring Con-Dom, Metal Pip! and Pestdemon.

Next, we made a guest appearance at a C’est Bon Kultur project: C’est Bon Black Box at Makeriet: 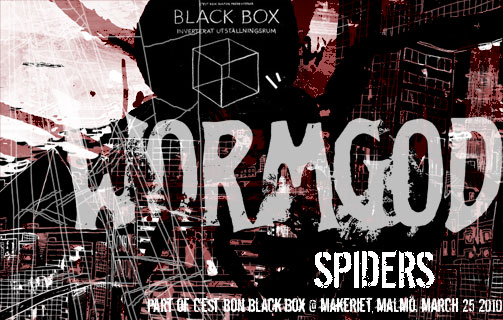 I June, I brought some prints and made a wall painting at the CRACK! festival in the catacombs beneath Forte Prenestino in Rome: 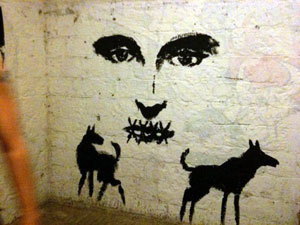 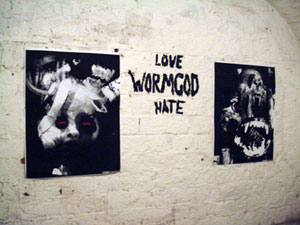 A rerun of the CRACK! prints with the addition of a new one were shown at the SingSang Studio in Malmö later in the summer, where we also arranged a gig with Concrete Threat. 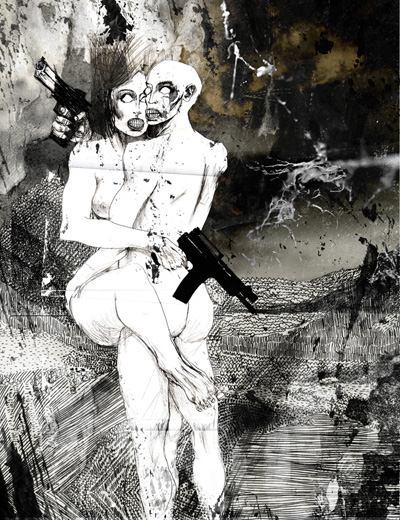 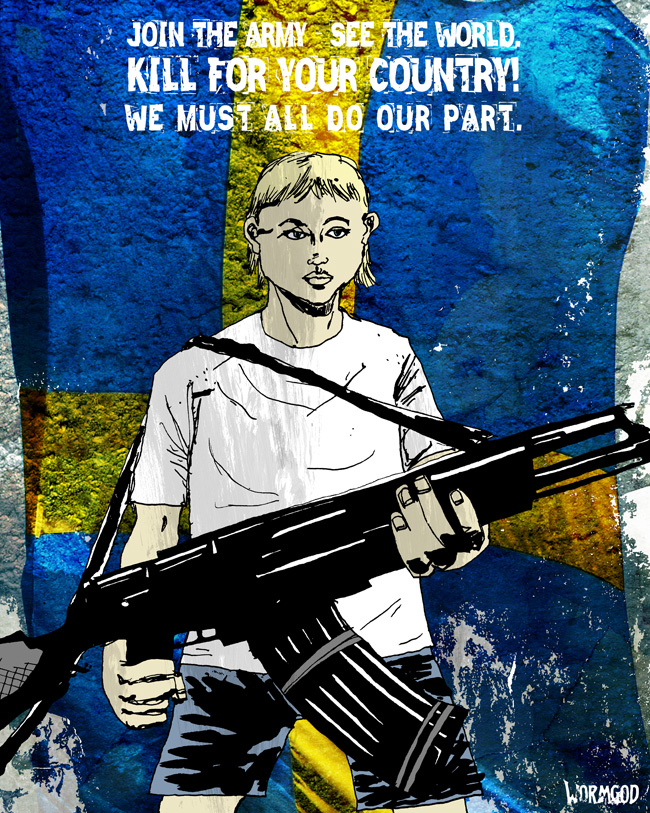 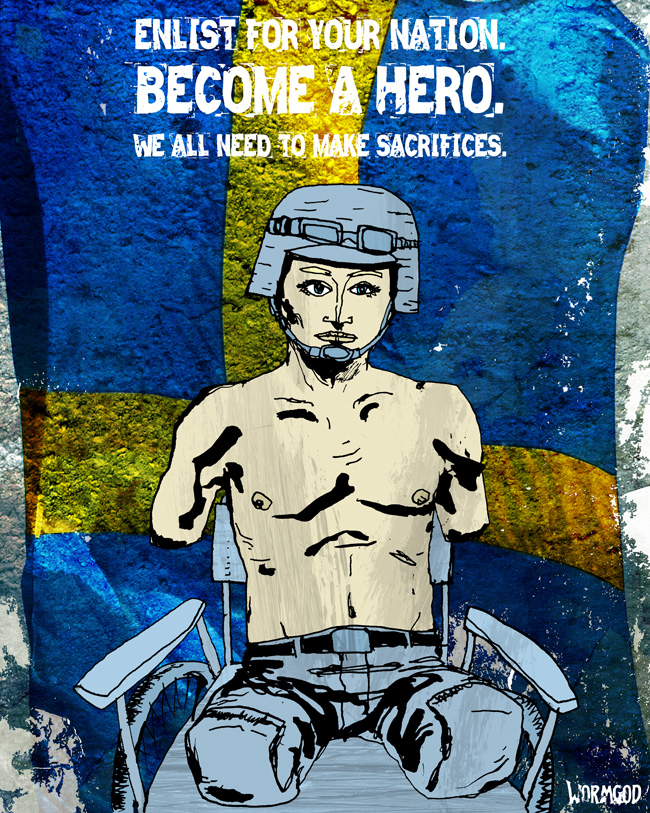 The latest thing we’ve done was the Wormgod: ZOMBIES exhibition, where we made a huge painting (1,8 x 25 m) being shown at Panora in Malmö during the AltCom 2010 festival. 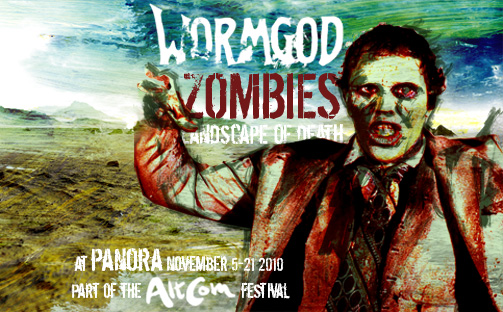 An assortment of different Wormgod images will also be shown this December at the Feira Laica festival in Lisbon.

Made some new Angry Animals work. Some was published in magazines, some just on my blog. Especially around the time of the Swedish election. 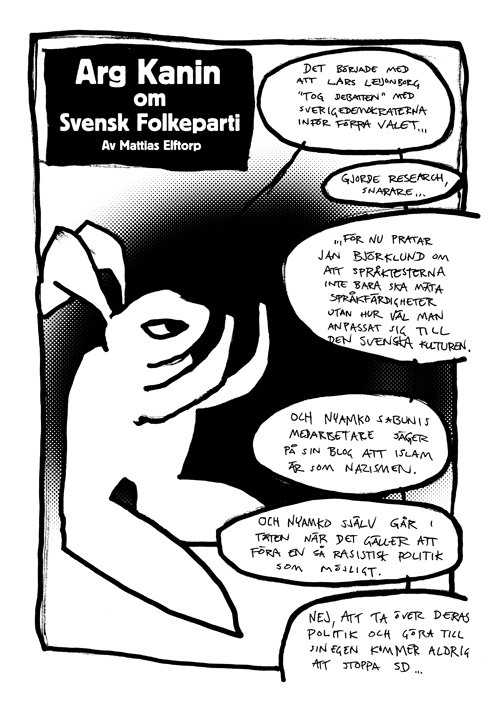 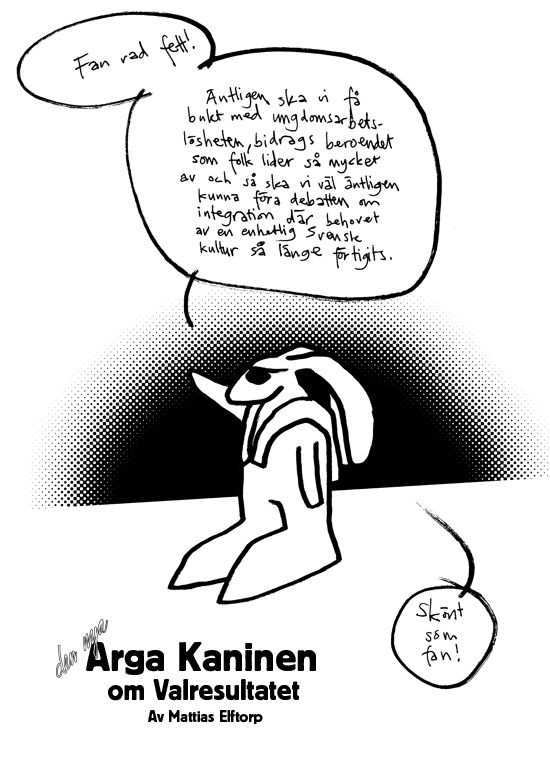 I also made an Arg Kanin comic for Seriefrämjandet’s MUS, MOUSE, MAUS exhibition during AltCom and another for Asylgruppens kalender (which you can read if you buy it from them, it should be out soon). 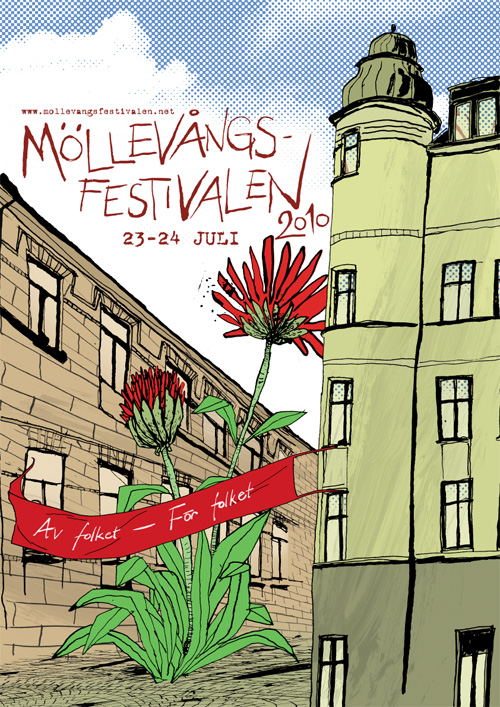 From August, most of what I’ve done has had something or other to do with the AltCom 2010 comics festival.

I made the graphics, designs, website and organisational work (with assistance from my subcomandante, Aida Ghardagian). My work was featured in several exhibitions connected to the festival, such as: 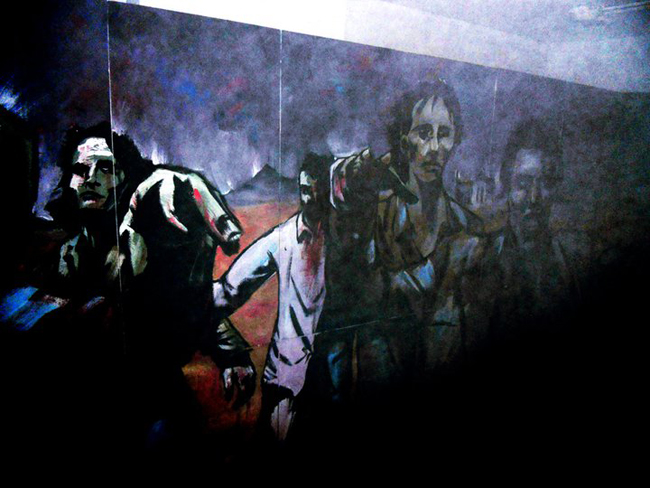 MUS, MOUSE, MAUS (still on show at the City Library) 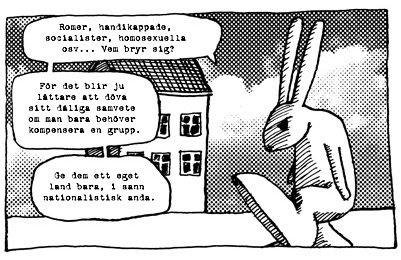 Yeah, I think that’s it, but knowing myself I’m probably forgetting something.

Edit no 1: Oh, yeah, I was interviewed and will be featured in the upcoming issue of Bild & Bubbla with a comic I’m calling Interdimensional Revolution.

Edit no 2: I knew I forgot something else. As you can see in the older entries of this blog, I made illustrations for Lena Sundström‘s book Världens Lyckligaste Folk as it ran for 22 weeks in Helsingborgs Dagblad during the spring/summer. 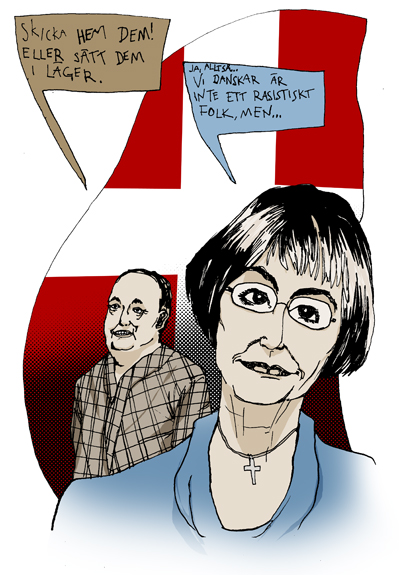 Edit no 3: Uhm, yes. The anarchist magazine Brand just released a special issue 2.5 called Life in Limbo, where they used some photos from Wormgod: ZOMBIES to illustrate the undead state of liberalism…

I’m going to give this post a rest now and stop updating. Check the links in the text above and at the bottom of this page to see more…

Trivia: All this was done without the ability to make an appointment on time or go to bed before 4, and without making much money (I know people who make more in two months than I do in a year). And I still had time to get drunk (at least) a couple of times a week.