So. The Crack! report.

I can’t get rid of the question: “Why isn’t it always like this?” The Crack festival takes place at a squatted fortress in Rome and it’s the most creative and energetic comics festival I’ve ever been to. The organizers keep it open for (more or less) anyone who feel that they belong there to contribute and it’s more about creating exhibitions than just selling books.

This year I was there with Johan Jergner-Ekervik for CBK and we didn’t really know what to expect. We also had no time to prepare anything, what with the trip to New York and everything, so we simply brought books to sell and improvised an exhibition by sacrificing a copy of CBAvol7. Next time will be different. I’m sure CBK will be better prepared, and hopefully I’ll be able to come with Suss and make a Wormgod exhibition. 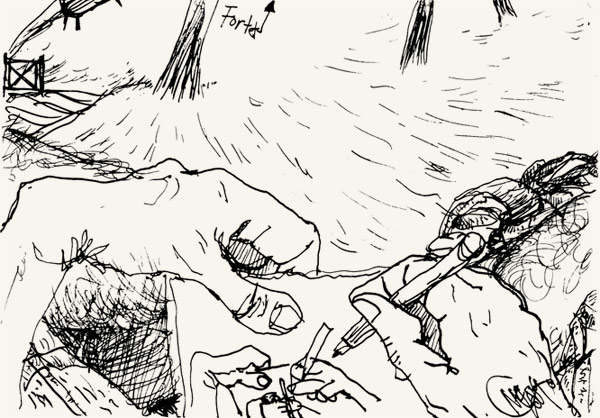 Anyway. While I was there, I got the feeling that this is how it should be done. Don’t get me wrong. I liked the MoCCA fextival and the others I go to, but they are all totally different from this. This is more like a music festval. You get up, sit in the grass for some hours with your breakfast beers and then everything starts at 18 and keeps going until late in the night, or sometimes the next day. Intoxicated people looking at art and comics. Loads of punk dogs. And good company from different places that aren’t sweden, which is always nice. Only setback was the lack of people speaking english (hence not being able to read our books). I always kind of interpret that as a sort of racism. An uninterest in being able to communicate with people outside your own language zone.

And so it got me thinking. Why isn’t it always like this? Why am I more and more losing interest in swedish comics culture, even as things are starting to change? And why is it that some interesting comics artists that I know here have lost interest in the medium, mainly because thay don’t feel at home in the dominant social culture of the swedish alternative comics scene? A scene where I’ve been hoping to have a home, but for some time now I’ve been losing that hope. Which may be just as well. I guess I’ll just have to move to Portugal or something.

Until then, I’ll settle for concentrating on Wormgod and Piracy is Liberation. Finding new audiences, doing new things. This morning I started planning for the Wormgod exhibition at next year’s Crack! festival. I look forward to it already.

And before the end of July I plan to have made another Piracy is Liberation book, a short comic for C’est Bon Anthology and at least one more image (after the one I’m working on right now) for an upcoming Wormgod exhibition (at Panora in August).