The Tusen Serier/Sverok wall/jam comics exhibition that’s been going on this week will be finished today, which we will celebrate with alcohol, of course. We have three jam comics going on the walls, and yesterday we made some connections between the different stories, so they will all be concluded today in a SUPER RAVE PARTY OF DEATH. Literally (or at least in some kind of literal form).

As you may know, I’ve been organizing the AltCom festival (website will soon be updated) for the Swedish Comics Association since 2010. The next edition, however, will be run by CBK in cooperation with Tusen Serier. I will still be the main organizer, but it still feels new and exciting.

And speaking of Tusen Serier, it just completed the transition from a project run by the Comics Association into an organization in its own rights. Which also feels great!

And one last item. A new book from CBK is nearing completion: Creation of a god / Att skapa en gud by Henrik Möller & Lars Krantz, based on a short story by Richard Stanley. Here’s the first official preview of the cover: 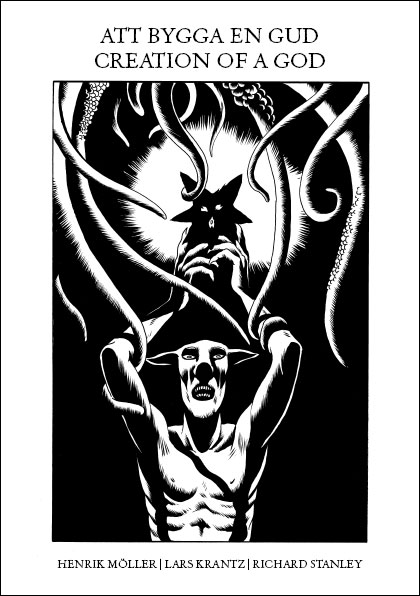